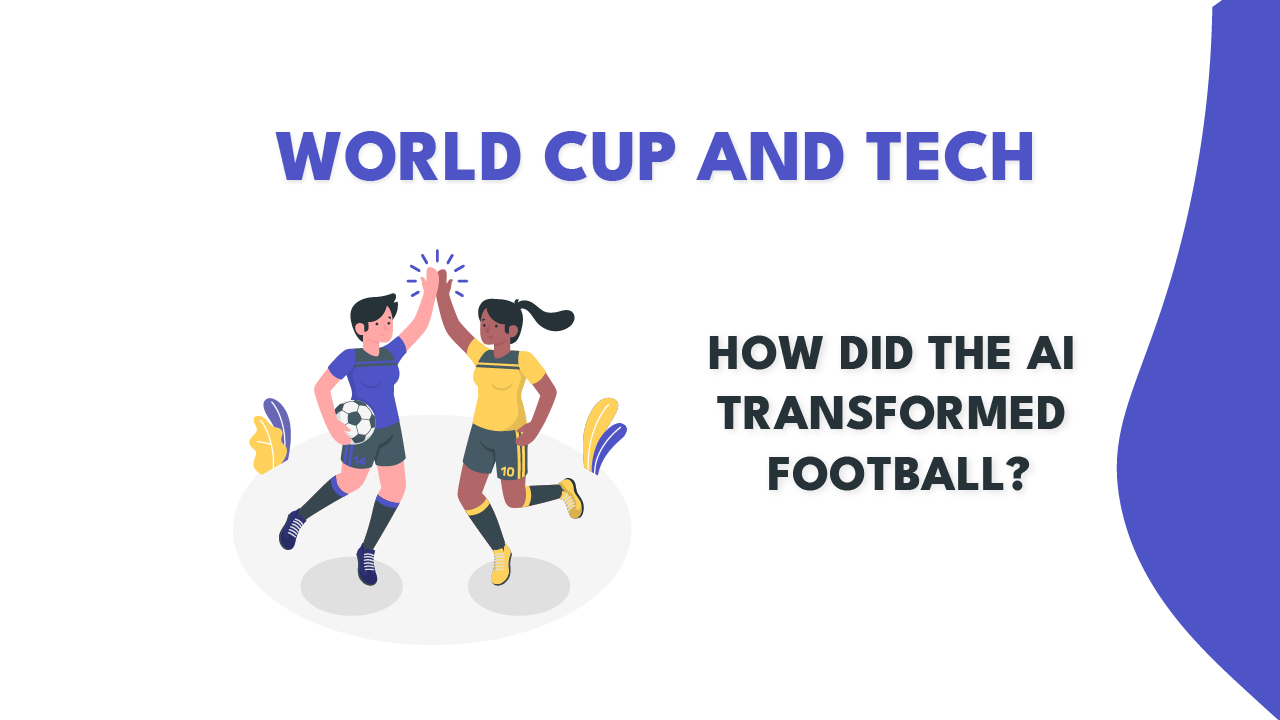 “The Hand of God” goal. Diego Maradona’s shot against England in the quarterfinal match at the 1986 World Cup is one of the most controversial events in football to this day. But much has changed in the beloved, intense and nail-biting game in the last 36 years. Now that football fans all around the world shift their focus to the biggest sports event in the world, we take a look at how much technology has impacted their favorite sport.

The adoption of AI in football has made running a successful team much about reading and acting on data sets. Maradona’s type of controversies will stay in football history. We wonder if the ultimate goal of tech adoption is to make the game fairer or keep football clubs profitable.

According to all this, here below we leave 7 ways ways in which AI is forever changing how football is played.

There is a lot of talent running around the football fields in every country, but the places on the rosters of the world’s best teams is limited and there is always the chance that someone may not make the final cut, purely because there wasn’t a team scout who watched him play. AiSCOUT, an England based startup, which allows amateur players to take videos of themselves practicing and doing different exercises for stamina, durability and skills, gives scouts the necessary information to make the decision whether they want the player or not.

The use of AI in football for scouting is further exemplified by Bulgarian sports analytics company Ensk.ai. They are also working on a next-generation football recruitment analytics tool. Using a combination of advanced statistical models, artiﬁcial intelligence, and understanding of the football club’s individual needs, philosophies, and team dynamics, the startup aims to reduce transfer waste and identify the right talent. The company is backed by the Bulgarian venture capital fund Morningside Hill.

In every match, there is always the chance of human error, in particular a coach’s error, which can be devastating for the outcome of the game. Therefore, more football clubs used AI to keep track and analyze their games as a team, every individual player’s performance, and even how their competitors play. This allows the coach to have good insights into what he needs to improve and how he can do this, lowering the risk of human misconceptions.

The most important thing in every sport is how players perform. How they handle the ball and accelerate, how much distance they cover in a game, and the list goes on. Keeping a precise track of all those elements was relatively hard up until the use of AI in football.

Now wearables enter the field to change that. The brand C-Exoskeleton is developing a knee pad, helping coaches and managers to keep track of their players performances.

In football, as in every other sport, injuries are the biggest setback for upcoming starts. When you play sports in a professional and competitive setting, you are expected to perform at your best. Moreover, some injuries can be lethal. With the implementation of AI in football and other sports, coaches know when a player is projected to get injured and they can decide what to do in the situation. This method also predicts when the player will be healthy enough to resume practicing and play at a high level.

Going back to the infamous “Hand of God goal”, maybe the history timeline of soccer would have been a whole lot different, if we had all the technology we use today.

This year, the 2022 FIFA World Cup implemented a new type of goal line technology, which sent the decision to the referee (VAR). This is believed to remove human error out of the equation, and lead to more fear matches. It will be fully automatic, sending real time signals to the control room of the stadium, where a computer will recreate the situation with 3D models, drawing the offside line and determining whether the goal should be awarded or not. Every bit of information will be communicated with the sideline officials, which eliminates the possibility of human error.

6- Controlling the temperature at the stadiums and predict fans swelling

The game of football has been a reason for a huge amount of fights between fans, crowds going out of control and people illegally entering stadiums to watch matches. To prevent this, more than 100 technicians worked from the capital, Doha, using AI-enabled facial recognition, fully automated doors and cameras, which guided people to avoid collisions between fans. There were more than 200,000 integrated units spreaded equally in the 8 World Cup stadiums, keeping track of the behavior of their fans and “controlling the crowd”.

The use of AI in football was saw broadcasting. Many platforms used AI-driven cameras, which follow all the moving objects that are on the field without the need of a human operator, thus allowing the platform to stream more games that otherwise would have never been seen from people, who are not at the stadium.